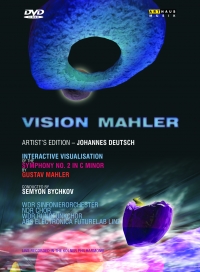 “What a world this is that brings forth such sounds and shapes as its reflected likeness!” Gustav Mahler The musical performance of Gustav Mahler’s 2 nd Symphony is interactively interconnected with the visual interpretation of the piece. The arrangement of the visualization concentrates on what the music expresses and the emotions it brings forth. Thus, Gustav Mahler’s cultural-historical setting and the sources of his own inspiration do not come into play in this visualization. This work is a matter of blending together two interpretations: one expressed musically and the other visuallyEighteen three-dimensional objects constitute a virtual domain that depicts the universe of the 2nd Symphony on an abstract level. Analogously to the music, the objects of the visualization undergo a process of transformation that Mahler lets us experience auditorially in five movements. The thematic junctures and stages of the 2nd Symphony—suffering, romanticism, irony, love, doubt and hope—are correlated to the transformation of these virtual objects. In the first movement, for example, objects assemble, form structures and then break down; in the second movement they dance, radiate and shine; the third movement infuses the forms with irony and distorts them; love is aglow with light in the fourth movement, and is succeeded in the fifth by tremors and destruction; then objects burst, signaling an exodus from the virtual world. Not until the finale does redemption make its appearance—everything shimmers, sails and floats away.
Label:
Arthaus Musik
Genre:
Konzert
Running Time:
135
Picture Format:
16:9
Sound Format:
PCM Stereo / Dolby Digital 5.1
Number of Discs:
3
Region:
0
Languages:
DE
Subtitle Languages:
DE, GB, FR, ES, IT
EAN:
0807280142198
UPC:
807280142198