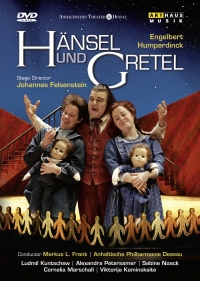 Hänsel und Gretel is a fairy-tale opera (Märchenspiel) by Engelbert Humperdinck to a libretto by his sister Adelheid Wette. The idea for the opera was proposed to Humperdinck by his sister, who approached him about writing music for songs that she had written for her children for Christmas based on „Hänsel and Gretel.“ After several revisions, the musical sketches and the songs were turned into a full-scale opera. Hänsel und Gretel has been associated with Christmas since its earliest performances, and it is often performed at Christmas time. It is much admired for its folk music-inspired themes, one of the most famous being the prayer from act II. A family classic, it grew out of a set of incidental music and, written between 1890 and 1893, it was first performed on 23 December 1893 under Richard Strauss in Weimar. The form in which the story is used in the opera derives from the collection of Ludwig Bechstein. Gertrud, the desperate mother, sends her hungry children into the wood to pick strawberries, unaware of the danger to which she exposes them until Peter, the broombinder, returns and is shocked at what she has done; both anxious parents immediately set out to find them. The thoroughly happy ending introduces another significant variation to the familiar version of the brothers J. and W. Grimm.
Label:
Arthaus Musik
Genre:
Oper
Running Time:
98
Picture Format:
16:9
Sound Format:
PCM Stereo / Dolby Digital 5.1 / DTS 5.1
Number of Discs:
1
Region:
0
Languages:
DE
Subtitle Languages:
IT, GB, DE, FR, ES
EAN:
0807280132199
UPC:
807280132199
Blu-ray:
101322